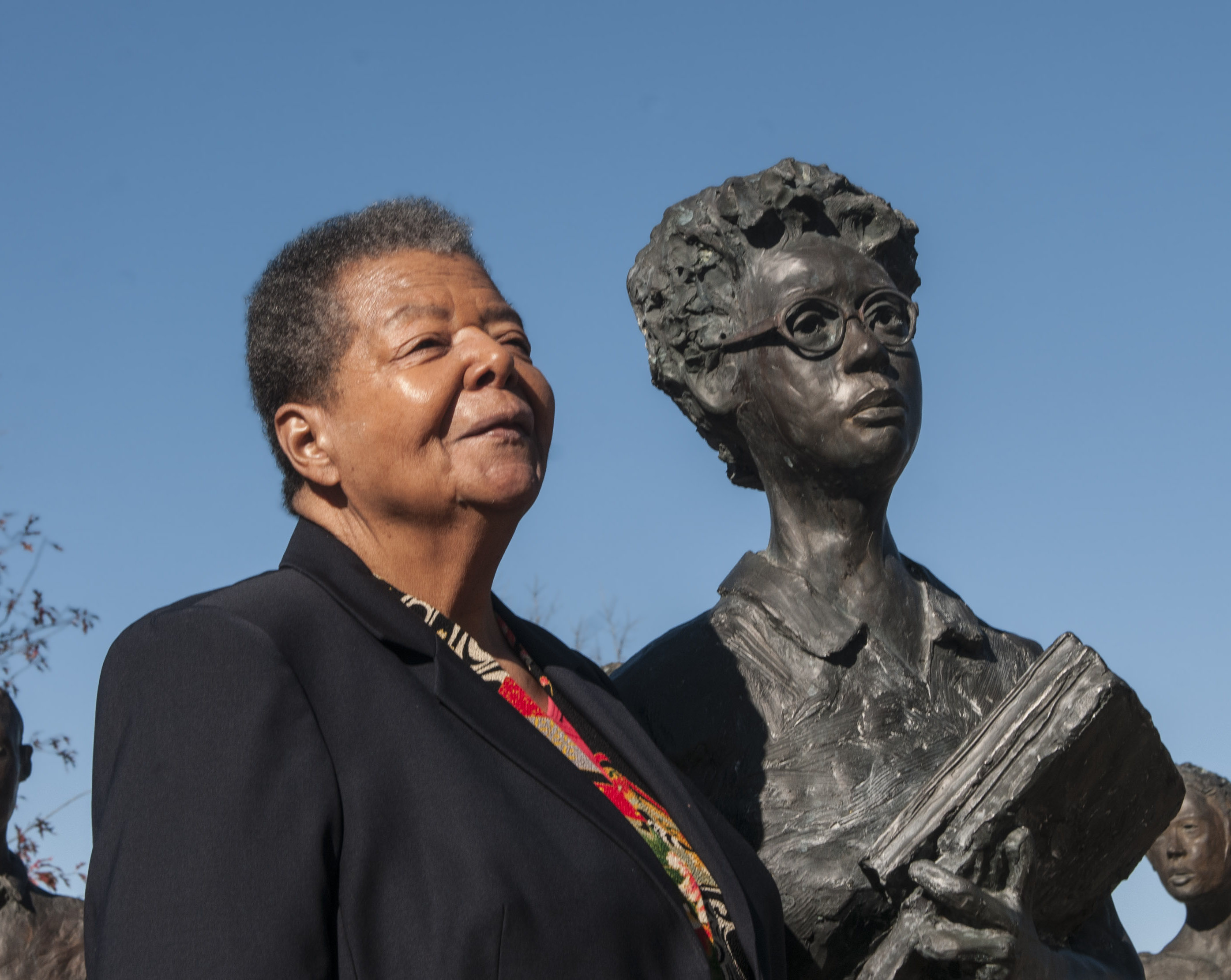 Elizabeth Eckford was the first member of the Little Rock Nine to arrive at Central High. While only a teen, she bravely withstood being blocked from school by armed soldiers and faced an incensed, segregationist mob alone. Images of her attack showed the world the face of discrimination, to the embarrassment of the nation. International images of Elizabeth’s attack sparked global outcry against racism and discrimination, resulting in President Dwight D. Eisenhower sending in the 101st Airborne for the students’ safeguard.

The daughter of Birdie and Oscar Eckford, Elizabeth is one of six siblings. She attended Central for one year and was homeschooled after the public high schools were closed to prevent desegregation. Elizabeth attended Knox college before joining the Army as a member of the Women’s Army Corps (WAC), serving five years. Her initial assignment was as a pay clerk before serving as an information specialist writing articles for newspapers at Fort Benjamin Harrison, Indiana, and Fort McClellan, Alabama. She was awarded the Army Good Conduct medal while on active duty.

After leaving the military, Elizabeth held a variety of positions prior to returning to Little Rock where she surrounded herself by family and raise her sons, Erin and Calvin. She achieved her goal of obtaining a college degree when she earned her BA in history from Central State University in Wilberforce, Ohio. She served as a Probation Officer for County Circuit Court Judge Marion Humphrey for ten years, retiring in 2009.

For her courageous acts as a member of the Little Rock Nine, Elizabeth received numerous awards from organizations grateful for their personal sacrifice and contributions to society. Most notably the Little Rock nine in 1999 received from President William J. Clinton the Congressional Gold Medal, our country’s highest civilian award. The Little Rock Nine have been honored with a United States Postal Service stamp in 2005 and a commemorative one-dollar coin from the United States Mint issued in 2007. In 2010, the Little Rock Nine received the Pere Marquette Discovery Award, the university’s highest honor for those who achieve an extraordinary breakthrough that adds to the advancement of human knowledge or the advancement of humanity.

In 2015 the Nine received the prestigious Lincoln Leadership Prize from the Abraham Lincoln Presidential Library Foundation for exceptional character, conscience, commitment to democracy and service. While teens, the Nine and Mrs. Bates received the Spingarn Medal from the National Association for the Advancement of Colored People (NAACP) in 1958 for upholding the basic ideals of American democracy and outstanding achievement. She shares with Hazel Bryan Massery the Father Joseph Blitz Award presented by the National Conference for Community and Justice. The Nine were inducted into the Arkansas Black Hall of Fame in 2007.

Elizabeth continues to reside in her beloved Little Rock and takes great delight in gardening and speaking with youth, who inspire her and continue her healing process. She resides in her childhood home with her sister, Anna Eckford Goynes, and son Calvin.

Purchase Your Copy Of The Award Winning Book Today!

We use cookies to enhance your experience and improve our services and our website’s functionality. By continuing to use our website, including remaining on the landing page, you consent to our use of cookies.